3 hotspots to eat in Amsterdam

Yes, it’s a Saturday and not the usual day that I share a post with you, but as you may have noticed, I’ve been MIA for a few weeks. Maybe you followed some of my moves on instastories, but yes ..I took a well deserved vacation of 2.5 weeks. So these following weeks, I’m sharing with you what I’ve done. It was a 2,5 week well spent in Europe. To be exact Holland (mostly Amsterdam), Berlin and Prague. Was my first time visiting Berlin and Prague and they surely would be revisited by me again. This was also one vacation I didn’t take a lot of pictures, even though there were moments picture worthy, but I just wanted to be in the moment of it all. So, this post (sorry for that), I’m only sharing pictures I took with my iPhone.
Eating well is something that’s a must on every trip. So, today I’m going to share with you 3 places that were awesome to eat and where the interior was also a treat.
1. PLUK
I’ve been following them for a while on instagram and it was one spot I really wanted to visit.

Here I had a work meeting and even though it was later a bit loud because of all the people in there, this is a great place to meet up with each other and to have great sandwiches or whatever deliciousness they are serving. It’s a white space with wooden elements and has a loft layout, meaning they prepare the food downstairs and the sitting area is upstairs. I was ready to move in. I’m a tea lover and I drink tea in whatever restaurants and I had a fresh mint tea. So delicious. It’s also a store where you can buy all sort of home decor and lifestyle pieces. It’s not a big place and that made it even more personal.
Pluk is located in one of the 9Straatjes (nine streets)
Adres: Reestraat 19
www.pluk-amsterdam.com 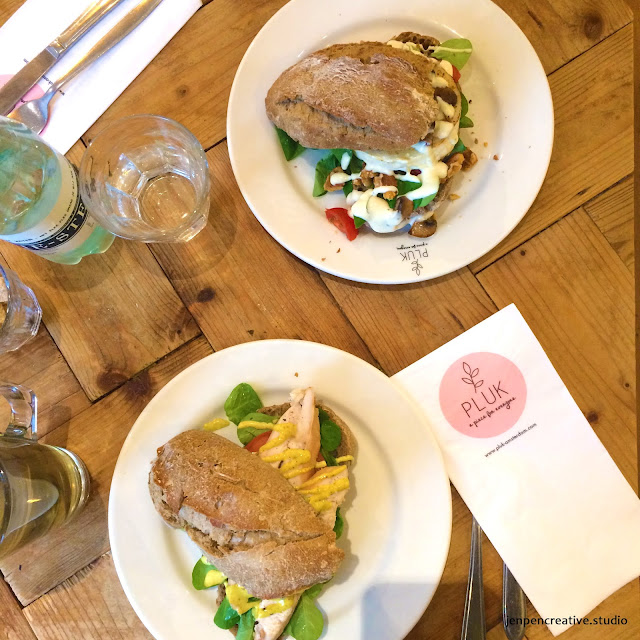 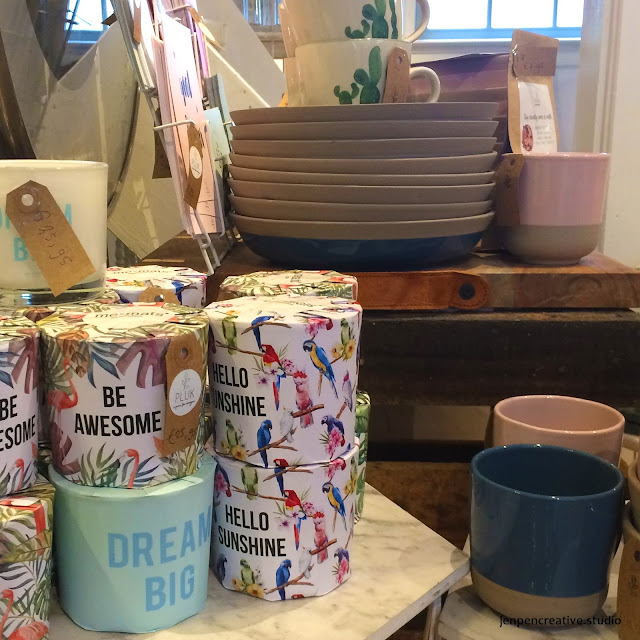 2. DE DRIE GRAEFJES
This one I didn’t know about and was more of a spur of the moment visit. I was sitting in the tram to go to the next hotspot on this list to make a reservation, I saw a friend in the tram. Totally unexpected ofcourse and she told me to get out at the next stop so we could go get some coffee at her favorite place. So, my plans changed and we were sitting in this place drinking coffee and tea and eating some delicious cakes. I had a strawberry cheesecake, which was delicious but a bit cold. But that didn’t stop me to eat it all up and enjoy it after all. We sat downstairs, but it seems there is a possibility to sit upstairs. For a quick meet up, this was a great place.
De Drie Graefjes is located in the city centrum of Amsterdam. It’s like seconds from the Dam.
Adres: Eggertstraat 1
www.dedriegraefjes.nl 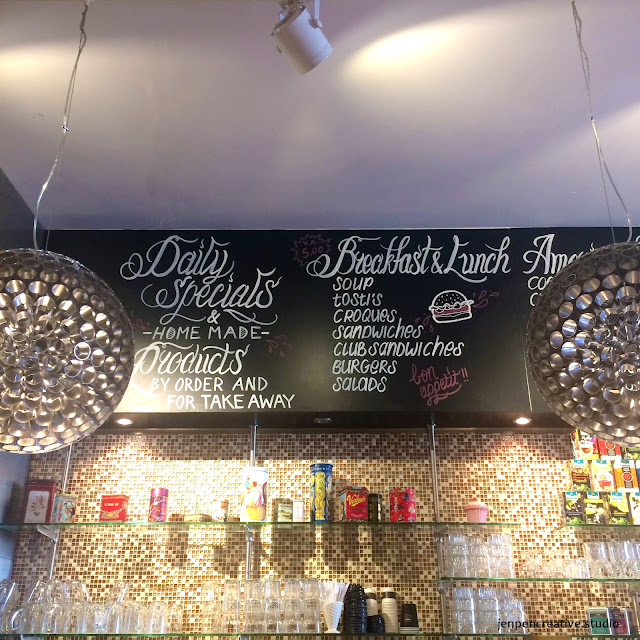 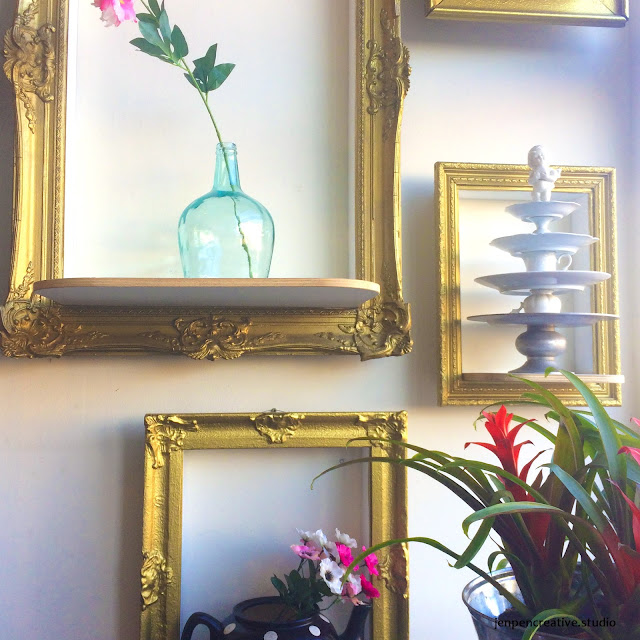 3.  UPSTAIRS PANNEKOEKEN
This place I visited with a friend the last weekend of my trip. He told me he wanted to eat pancakes and heard of a place that only 4 people can eat there. Sounded a bit strange, so I searched it  up and indeed it was a small little place, but instead of that only 4 people can eat there, there is only 4 tables (meaning more than 4 people can eat there). It’s indeed very cramp, but that made it very cozy and personal. I made reservation, but they told me they could only hold it for 10 minutes. So, we were running literally to make it in time. We were seeing people coming in late and losing their reservation, because it’s a hot ticket. The ceiling is all covered with all kind of teapots and the decor is just like going to your grandma’s house, but it totally fits their concept.
The pancakes combinations were delicious, even though it’s just a bit overpriced for the pancakes. But it’s really worth the try.
They are also not very far from the Dam.
Adres: Grimburgwal 2
www.upstairspannenkoeken.nl 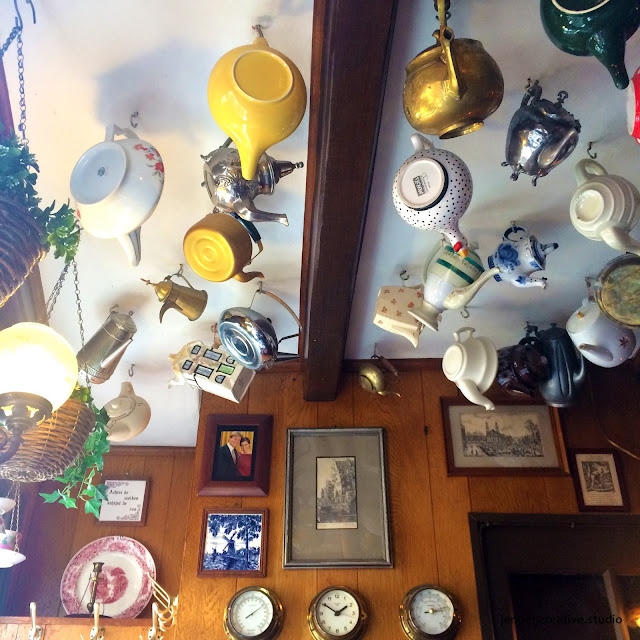 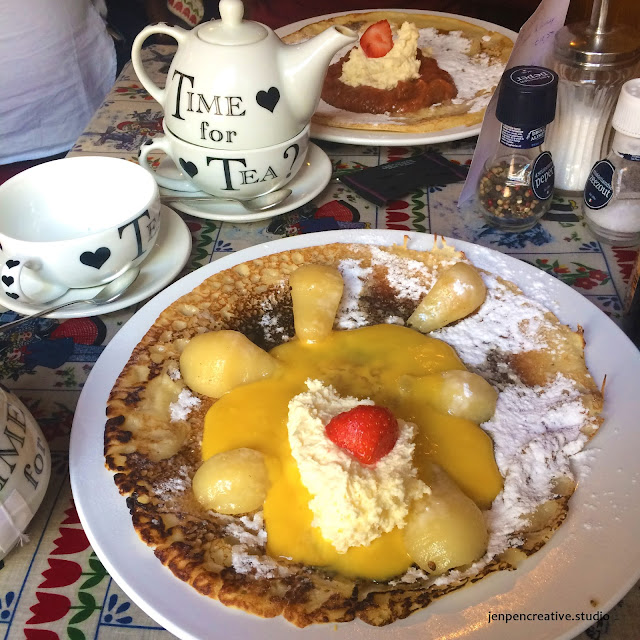 Besides these sweet little places, you should also visit:
1. NOOCH
If you’re a lover of Asian food.
Adres: Reestraat 11
www.nooch.nl
2. ZEN
If you’re into Japanese food. This was a two thumbs up for me.
Adres: Frans Halsstraat 38
3. OLIVE AND COOKIE
If you’re a fan of vegetarian and vegan food. This little place is just awesome as the owner and her husband prepare the food themselves.
Adres: Saenredamstraat 67
www.oliveandcookie.com
4. BAZAR
For a bit of Mediterranean vibe in a huge place.
Adres: Albert Cuypstraat 182
www.hotelbazar.nl
5.VISAANDESCHELDE
If you want to do some fine dining and have some serious seafood at it’s best, this is the place to be. Without a doubt one of the best places I’ve eaten and I’m sure I’ll be back for more.
Adres: Scheldeplein 4
www.visaandeschelde.nl
6.WATERKANT
Delicious cakes and ofcourse waterview
Adres: marnixstraat 6
www.waterkantamsterdam.nl
Ofcourse there are so many places to go in this city, I mean there’s something on every corner. But these were my picks and if you happened to be there, make sure you go to this places. You’ll thank me later.
Have a lovely Saturday and enjoy the rest of your weekend.

Spa Day at its Finest.