Yesterday I told you the story of the great storyteller Migarda Raphaela, well today I’m going to share with you the day I spent with author Ronny Lobo. I’m just going to be honest and tell you that I didn’t had a clue that he wrote 3 books!!! Not one, but already three. I’ve known him as an architect from his Atelier Lobo & Raymann. I mean working for 11 years at a architectural design office, I had to know the “rivals” of my former boss. I never met him, but it was such a pleasure meeting him and getting to know that he’s a open and kind man. 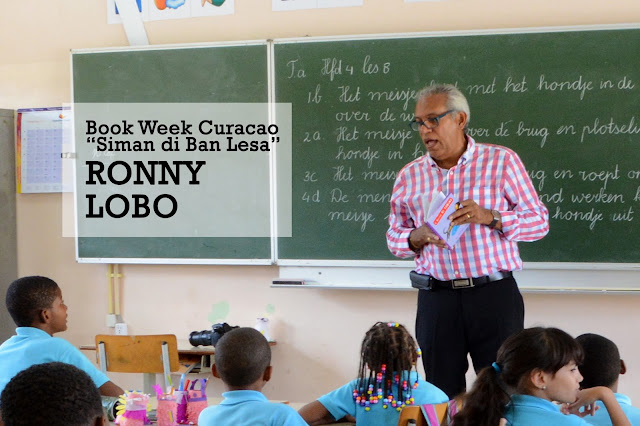 So when the team of Biblioteka Nashonal Korsou told me I was going to be team up with him, my first question was: “what is he planning to do?”. They told me he’s going to read from his book “E biahe di Tobias” (The trip of Tobias). This book is written in Papiamentu (our mother tongue) and the book has been distributed to every elementary schools. As I didn’t know the book, I did my part to read it in a few hours. Even though it’s a kids book, I totally fell into the story. 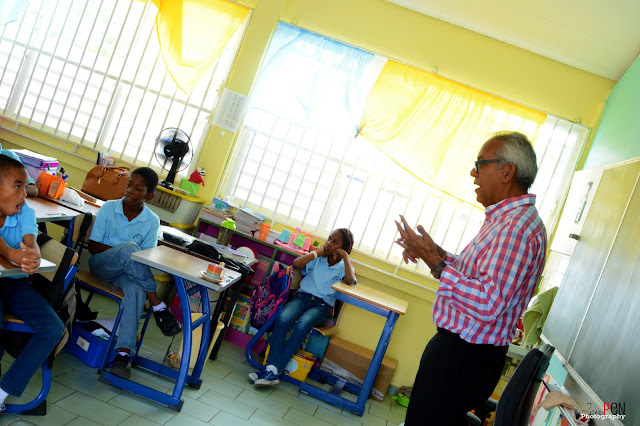 But before he began reading from the book, he told a bit about himself and his work as a author and as an architect. The book “E biahe di Tobias” was written in the year 2005, so I wasn’t a kid anymore when he wrote it. I then got a chance to present myself and talk about my work. 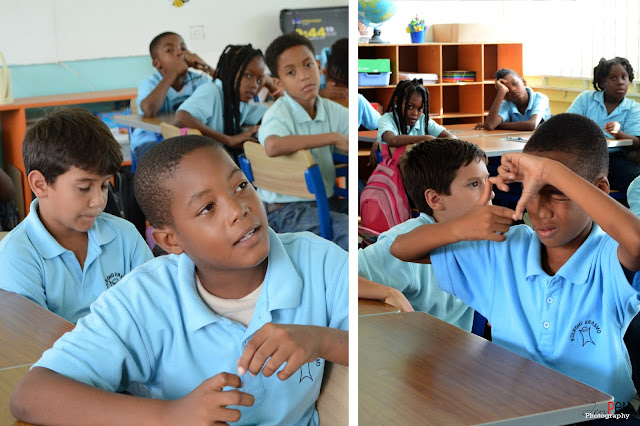 The book is a bit based on his own life. The story is based on Curacao and in the Netherlands (Holland). It’s all about a dog called Tobias, who got lost and got himself into a huge shipping container and ended up in Holland. In the story, Tobias was given as a gift by Ronny’s dutch neighbors, who decided to go back to Holland. They left Tobias for Ronny. Ronny was totally happy with Tobias staying with him. But when the moving vans came to pick up their stuff, Tobias ran into the van. Why did he ran into to the van? He was running after a lizard. That is the common thing for a dog to do on Curacao. 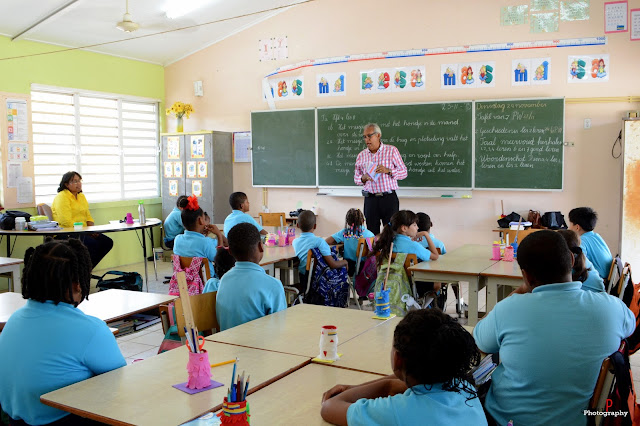 So, Tobias ran into the van and disappeared in the eyes of Ronny and his family. They went looking for him, eventually even reported Tobias missing. Tobias was then long gone on the big ocean approaching Holland. When he arrived there and they opened the container, he ran out quickly. As he has been scared and hungry for days in there.
He ran so quickly. Eventually he found himself in the city of Delft. There he got new “parents”. Ronny never forgot about Tobias and was always longing for him. After a few years the father of Ronny had to go to Holland to get a degree for his work. He took his family with him for two years. They ended up in Delft, where Tobias was living. Once there, Ronny asked his mother if they could get a dog. They eventually ended up in the animal shelter. Ronny heard a familiar cry and to his surprise it was Tobias. Tobias’s “parents” went on a vacation and left him there to be taken care off. Ronny wanted to take Tobias with him, but the animal shelter owner told him that the boss of Tobias will come back for him and that he can’t let Ronny take him. Ronny cried and cried. His mother decided that they will visit Tobias everyday until they come and pick up Tobias again. The days passed by and the owners of Tobias came to pick him up. Ronny and his mother explained the situation to them and to their surprise the owners gave Tobias back to Ronny. The kids of the owners just wanted to keep visiting Tobias as well.
Ronny was happy, Tobias was happy and quickly went by the two years in Holland. It was time to go back to Curacao. Ronny got older but always loved his buddy Tobias. Tobias also got older and later died at the birthday of Ronny’s little sister. 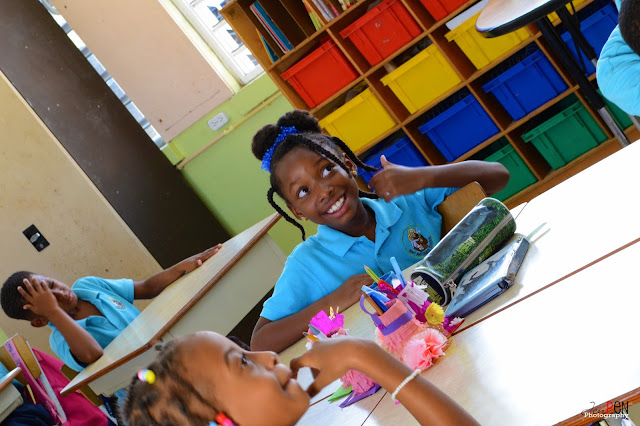 Okay…went I read that last part, I almost teared up. I mean, c’mon…Tobias could have lived forever in this book for my part. But let’s keep it real and that’s what happened.
As I already said, the book is based partially on Ronny’s own life, as he had two dogs who he named Tobias. The one he had on Curacao, he got it indeed as gift from his dutch neighbors and when he was older and went studying in Holland, he got a new dog and called that dog also Tobias.
After he read a part of a chapter of the book, we were interacting with the kids by asking them questions. I then took photo’s of the kids and showed them later to them, so they now have the turn to write or draw a story about the picture they saw of one of their classmates. At one of the school we visited, they even got the chance to read it in front of the class for us.
The highlight of the day was, when Ronny told the class about another book he wrote called “Tirami Su”. It’s a book for teenagers and older, about love etc. Little did we know, there was an Italian little girl in the class. She raised her hand and translated and told the meaning of the title of the book. Her eyes just lit up, as if she was so happy to finally speak Italian to another person in her class and that person answering her back. Meaning Ronny Lobo can speak Italian people!! 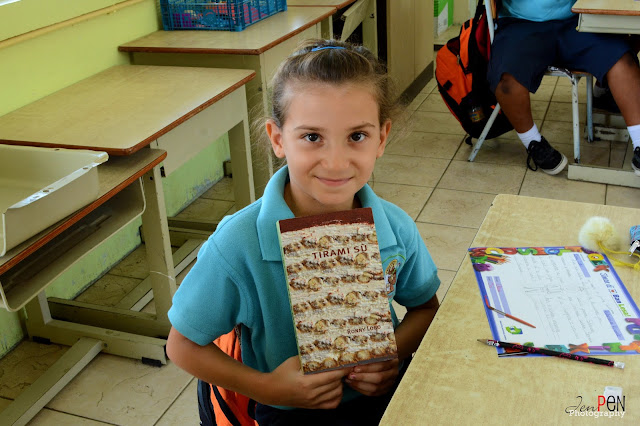 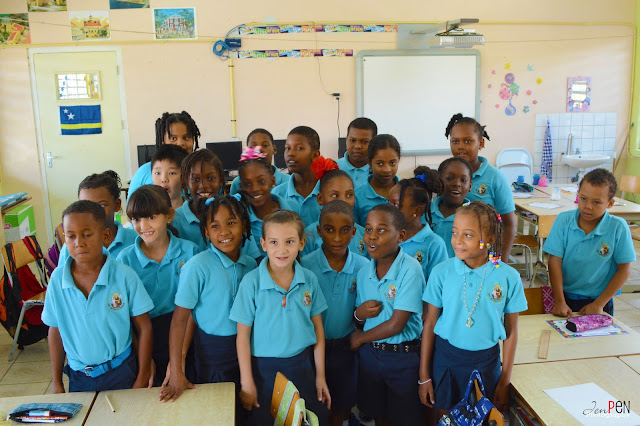 So that day I worked with author and artist in one. How cool is that?! It was fun to see how these little kiddos can have great imagination and write up their own story or even draw what they wanted to tell.

Ronny Lobo wrote in total (till now) 3 books. “E biahe di Tobias” is the only kidsbook he has written. The two other books are called: “Bouwen op drijfzand’ (Building/constructing on quicksand) & “Tirami sù”.

If you want to check out more about his atelier, please click here.
Tomorrow I’ll be presenting another writer to you. Hope you like the story today. Do you have book week where you live? Do share in the comments below.