Can you believe it? 4 stories down and just one more book week story to go. Yes, I’ve enjoyed my time with all of them and closing the week with this fine lady was the cherry on top. Let me introduce to you Laura Quast. Laura is a writer of storytelling and poetry and the story that she told was about a little boy called Wendell a.k.a Wenchi. 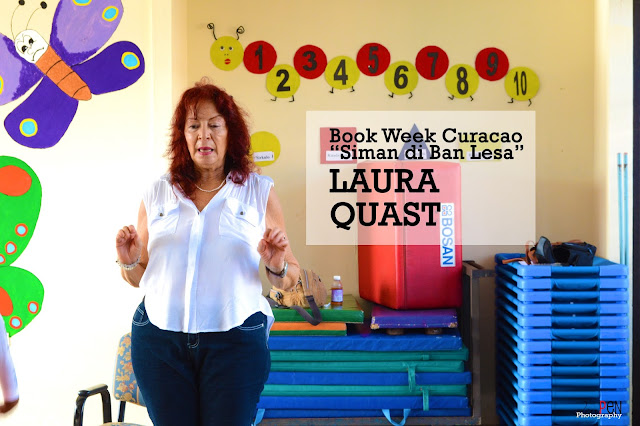 But before we get to the story, let’s get a little history of Laura. Laura was an elementary schoolteacher and was very close to her family. Her mother is her daily inspiration for storytelling as her mother always told them as kids great stories that she made up. Laura even encouraged her mother to write them down in a notebook. And it’s a good thing she did, because now she has a great treasure of her mother with her always. She was also a drama teacher and played in several plays, she even directed some plays.
Okay, going back to the hours I spent with her. We visited two schools. The first school was close to her home so she went directly to the school. Meaning I came later as I depended that day on transportation to go to the school from the library. We were in total 4 groups of two. So when I arrived Laura was already telling her story. Once again I said hello and good morning with a low voice but with a big smile and just sat down next to her. After a bit she let me introduce myself to the class. These were first graders, so storytelling was a great thing for them.
The story begins about a boy called Wenchi. Wenchi is known for swimming very good and fast. But there is another boy in the class that starts to tease Wenchi and telling him that he can swim faster than Wenchi. This boy’s name was Ronchi. He was being very macho and telling everybody that he’s better. One day the school took a trip to the beach for a swimming race with another school. 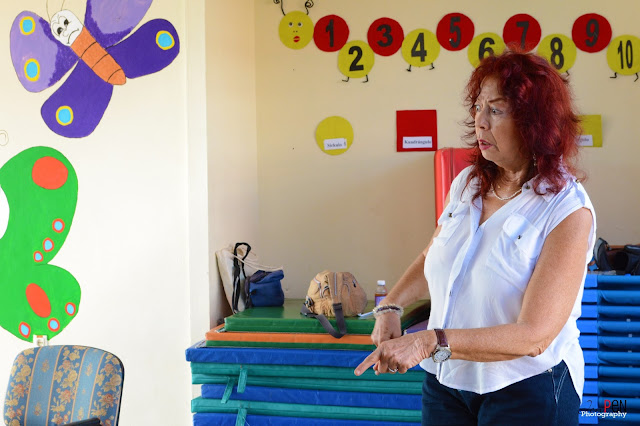 Laura asked the kids to which beach should they go. We heard every beach possible that’s on the island and she then picked one. Then she started to sing a song that’s about taking the bus. The kids knew the song, so everybody began to sing and clapped their hands.
The story continues that the boys arrived at the beach with their classmates. Wenchi was nervous but he knew that he can swim fast. But Ronchi was still bragging that he was faster. That made Wenchi even more nervous. The match started with the other school and they started to swim. Wenchi was doing just fine and swimming good, but he let his fear and strength fail him. He lost the race to Ronchi. Ronchi was bragging even more now. Wenchi was very upset when he got home. His mother asked him if everything is okay. He told his mother that he lost the race and that he didn’t get first place. His mother told him that 2nd place isn’t bad either. But that didn’t cheer him up. He was unhappy and walked to the near by beach and went sitting on a big rock next to the sea. 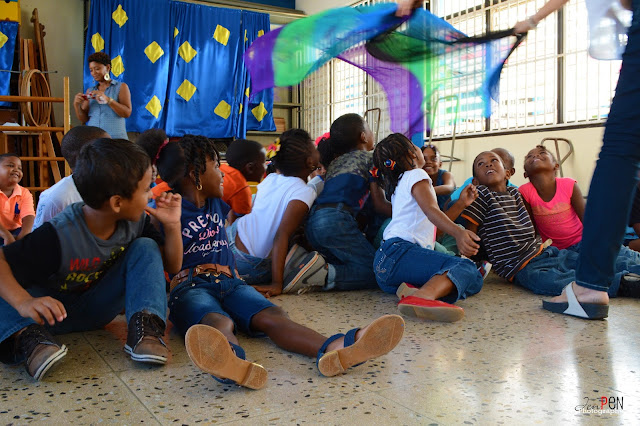 Laura then made sounds of the sea and took out a big scarf and passed it over the kids like they were in the sea. Everybody wanted to be in the sea. The story continues that Wenchi saw something in the sea. It was a mermaid. Every kid gasped.
The mermaid asks Wenchi what’s wrong. Wenchi tells her the story about what happened. She goes back into the sea and comes back with a bag with a big beautiful shiny stone. It was a beautiful pearl. The mermaid gives the pearl to Wenchi and tells him to hold it tight and hold it in the air and look up. The mermaid tells him to say three times “I can” and then “Yes”. The day came that the school of Wenchi had to race again against another school. And Ronchi was teasing him again, but this time Wenchi wasn’t nervous, because he had the pearl that the mermaid gave him. He had to do exactly what the mermaid told him. That he can do it and say yes at the end. That’s what he did. He was ready for the race and was swimming like a champ. Wenchi won the race. Yay!! Ronchi came to him and apologized for teasing him and they became good friends after that. Wenchi went and became one very successful swimmer and winning gold. 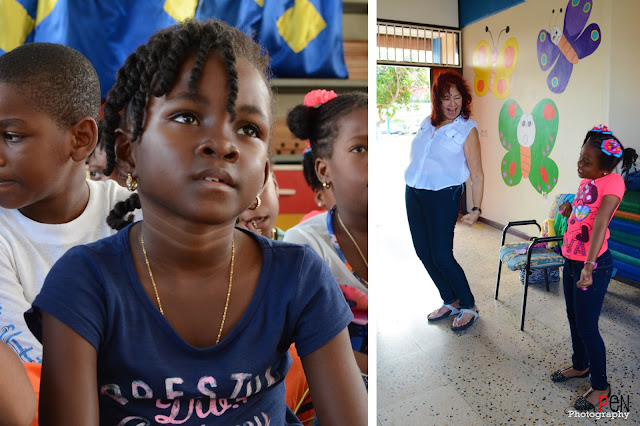 Laura got 2 boys then 2 girls to play Rochi & Wenchi. They played the whole story. So much fun to see the excitement on their faces.
At the first school with the first grades, I let them stand in groups of 4 and tell us what peace meant to them. So sweet to hear little kids express what it meant to them. No fighting, helping each other, giving hugs, were among the things they said. 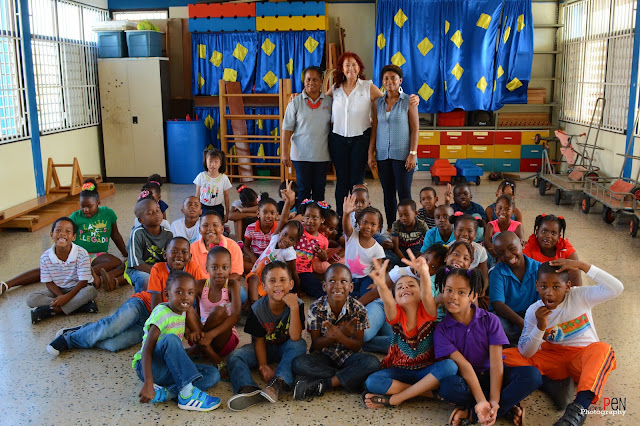 The second school we visited we got older kids. Like two class older. But to our surprise the story about Wenchi & Ronchi was also a big hit there. Here I asked them to express what peace meant to them, not just in words but to play it out. Also a great way to interact with them. 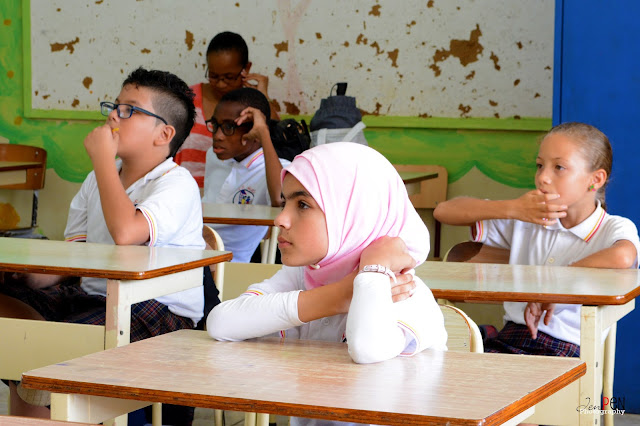 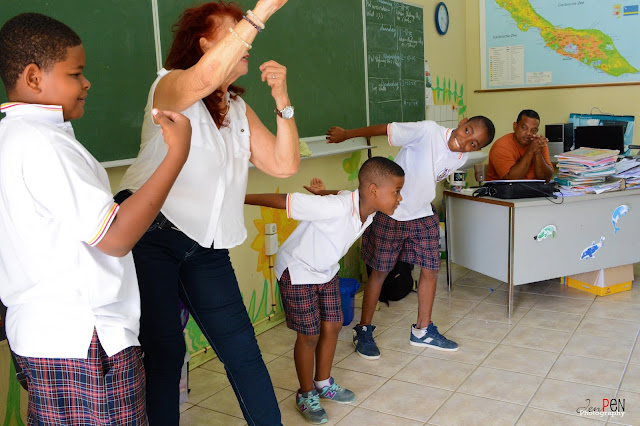 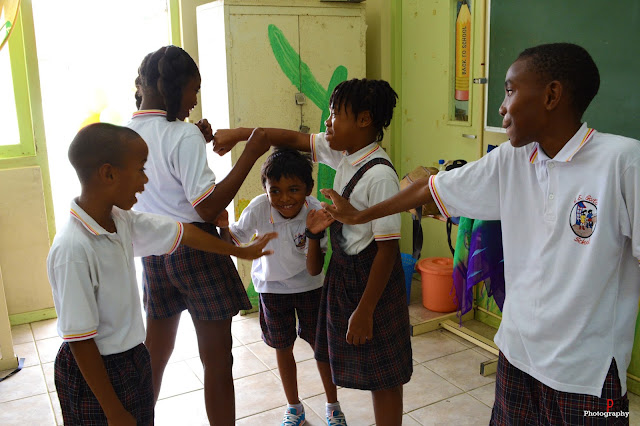 Here is how one group told us that peace meant no fighting for them. They played it out (while laughing every bit of it) that the two girls are fighting and that the guys are telling them to stop. I couldn’t keep a straight face. Like seriously, why should I right?!
So, that was my morning with the lovely Laura.
I had allot of fun with Laura and being very inspired by her. If you want to get to know more about her history, please click here.
So, that’s it people. Book week is over!! No more stories to tell about the authors I’ve worked with, because that was it. Next week other inspiring stuff for you to read. Wishing you a good weekend and enjoy your rest time (if you could have any). Ciao!!